OBGYN > What are the Reasons for Spotting Before Periods?

What are the Reasons for Spotting Before Periods? 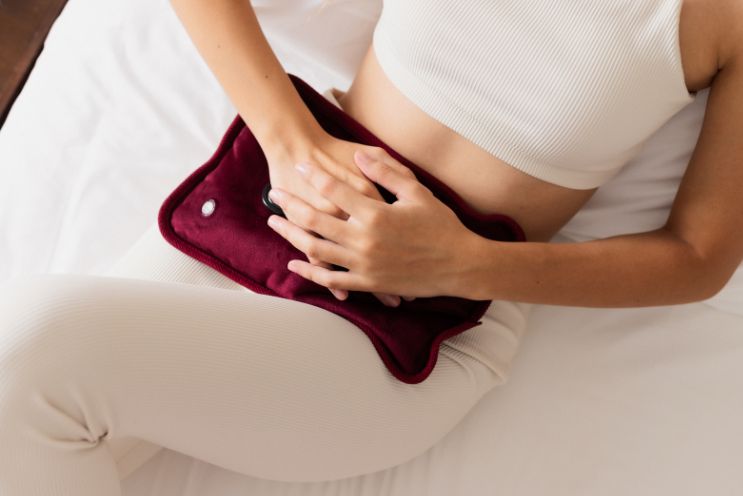 What are the Reasons for Spotting Before Periods?

Spotting before a period can cause panic or distress among women. So, why am I spotting before my period? This question may result in sleepless nights; therefore, knowing the causes can help avoid that. Usually, spotting before your period is considered harmless. Although, it can also be an early sign of pregnancy. Other causes of such spotting include hormonal imbalance, implantation bleeding, polyps, or other health conditions. Let us take explore the reasons in detail.

What Is the Difference Between Spotting, Bleeding and a Period?

Spotting is light bleeding from the vagina that occurs outside of your regular period. Spotting typically involves a small quantity of blood. It is usually only noticeable on your underwear or toilet paper after wiping. Spotting is generally irregular and can occur anytime, although some women experience it simultaneously each month. There can be a variation in color texture, which is usually different from your regular period.

Menstrual bleeding happens approximately every 28 days. Bleeding due to your period is usually regular and predictable, although it can fluctuate slightly. Other symptoms: Bleeding caused by a period may be preceded or accompanied by different symptoms such as nausea, breast tenderness, and cramping. The color of menstrual blood is primarily bright red, though there can be a bit of variation or a brownish tinge.

Spotting has various causes. Usually, spotting is harmless but rarely indicates a serious underlying health condition. Therefore, it is advisable to consult a doctor.

Spotting on birth control can happen spontaneously or if you:

If you are wondering on how to stop IUD bleeding and spotting, talk with a doctor if your symptoms are not improving. Another common concern amongst women is plan b spotting vs implantation bleeding, as they can be similar.

Light spotting during pregnancy is relatively common. A certain number of pregnant women may notcie spotting during their first trimester. The color of the blood can range from light and may be pink, brown or red in color. Spotting after sex during pregnancy can occur as well. Spotting typically shouldn’t raise any alarm, but you inform a doctor if you have it. If your concern includes something like ‘5 weeks pregnant spotting when I wipe,’ contact a doctor. Moreover, if you experience heavy bleeding or pelvic pain, you need to inform your doctor, as these can be signs of miscarriage or an ectopic pregnancy.

Conditions such as polyps, fibroids, thyroid problems, endometriosis and infections such as STDs can lead to spotting.

Polyps are small mucosal growths that can grow on the cervix or uterus. Most polyps are benign or harmless.

Cervical polyps can cause:

A doctor can easily visualize cervical polyps during a routine pelvic exam. Mainly, treatment is not required unless symptoms are worrisome. However, they can be removed. Uterine polyps are identified on imaging, such as an ultrasound. They’re mostly benign, but rarely can they become cancerous.

Uterine polyps can lead to:

Some individuals may experience only light spotting from polyps, and others may remain symptomless.

Uterine fibroids are growths on the uterus. Fertility can be affected in some cases and it may be harder to get pregnant for a women.

Besides spotting between periods, they may cause:

Some people with uterine fibroids may be symptomless. Fibroids are usually benign and can shrink on their own.

Endometriosis occurs when endometrium-like tissue grows outside the uterus. The common areas for such growth include:

This results in spotting between periods or bleeding. This condition is quite common. Although, may cases are undiagnosed.

The main signs and symptoms of endometriosis can include:

Can stress cause spotting is another common question that crosses a woman’s mind. Stress can lead to drastic changes in your body and affect your menstrual cycle. In some individuals, vaginal spotting can occur from both high levels of physical and emotional stress.

There are certain medications that can lead to bleeding between periods. Commonly these medications include:

If such is the case with you, your doctor may switch your medication.

If you are experiencing spotting, but no period, your thyroid gland may malfunction. Having an underactive thyroid also known as hypothyroidism, can lead to spotting even after your period ends.

Hypothyroidism means that your thyroid is not producing sufficient thyroid hormones that regulate many of the body’s processes and affect your period as well.

Other signs of hypothyroidism can include:

An infection can also cause spotting in the reproductive organs. In this case, it is usually accompanied by a fever and pelvic pain. The symptoms can worsen during sex and lead to a foul-smelling vaginal discharge. This type of infection can occur during menstruation or at any time during the month.

If you suspect that you have any vaginal infection or an STD, consult our doctor for treatment.
Talk to a Doctor

Ovulation spotting is defined as the light bleeding that occurs around the time of your menstrual cycle when an ovary releases an egg. Such spotting before the period typically occurs 14 days before menstruation.

Spotting during ovulation may be light pink or red. It usually lasts for 1 to 2 days and occurs mid-cycle.

Other signs and symptoms of ovulation may include:

If you want to know whether spotting during ovulation is a good sign or if you are worried about symptoms such as spotting 4 days after period ends, you should consult a doctor for further advice.

Irregular bleeding or spotting a week before period can be a sign of polycystic ovary syndrome (PCOS). This condition typically results when a person’s ovaries or adrenal glands produce high amounts of male hormones, also known as androgens.

This can affect the menstrual cycle and make it harder to conceive.

Some other symptoms of PCOS include:

Sexually transmitted infections (STIs), including gonorrhea or chlamydia, can cause spotting between periods or post-intercourse.

Other STI symptoms include:

If you have any symptoms of an STI, consult with our doctor for treatment.

Abnormal or irregular bleeding between periods is a common symptom of pelvic inflammatory disease. A woman can develop PID if the bacteria travel from the vagina to the uterus, fallopian tubes, or ovaries.

Other PID symptoms can include:

PID may be severe or life-threatening if the infection spreads to the bloodstream. Therefore, antibiotics are commonly prescribed to treat PID.

Some Other Reasons You’re Spotting The Week Before Your Period

If you are experiencing spotting instead of a period or light pink spotting before a period, this may actually be implantation bleeding. Implantation spotting typically occurs when a fertilized egg adhers to the inner lining of the uterus. About 15 to 25 percent of pregnant women may experience this.

If implantation spotting does occur, it will often happen a few days before your next period begins. Light blood in discharge but not period may indicate implantation bleeding, which can be light pink spotting, pink spotting or dark brown in colour. It is lighter and lasts for a short duration.

Symptoms that may accompany implantation bleeding include:

If you are concerned about late-period brown spotting when I wipe or bright red bleeding a week before my period is due or confused regarding plan b spotting vs implantation bleeding, here are a few pointers that may help.

Implantation bleeding and your period can be differentiated based on the following:

So, if you are experiencing spotting instead of a period with a negative pregnancy test, you may still be pregnant.

You have a hormone imbalance.

Conditions such as PCOS, thyroid problems, or the use of birth control can cause hormonal imbalance and result in vaginal spotting.

You’re under the weather

Other medical conditions and stress can affect your body and lead to a hormonal imbalance resulting in spotting or affecting the menstrual cycle.

How do Doctors Diagnose Vaginal Bleeding?

Your doctor will question your symptoms and medical history. After that, they might perform a physical exam and pelvic exam accordingly. Some commonly asked questions include:

The doctor may order the following tests to investigate the cause :

Do you have spotting before your period? Consult our doctor for treatment.
Talk to a Doctor

How is vaginal bleeding treated?

The treatment for vaginal bleeding may depend on several factors. The main ones include the cause of the bleeding, your age and whether you want to conceive. Furthermore, a doctor may recommend lifestyle changes such as a healthy diet, reducing stress and exercise.

Depending on the condition, medication or surgery may be required to treat vaginal bleeding.

What do I do to Prevent or Avoid Vaginal Bleeding?

Bleeding while on your period is normal. However, abnormal vaginal bleeding can negatively impact your life. Mostly, the causes are harmless, but if the symptoms continue, you must consult your doctor.

What Can I do About Spotting Before My Period?

If you are experiencing vaginal bleeding or spotting, along with the following symptoms, you should consult your doctor:

When to Consult a Doctor for Spotting?

In most cases, spotting is not a sign of anything serious and is usually not a medical emergency. However, you must seek medical attention if you have symptoms of an infection, have any injury or have been sexually assaulted.

It is essential for all women to keep track of their menstrual cycles so that they can identify any changes and abnormalities. If you are unsure about the cause of your spotting before a period, consult our online doctor for advice at Your Doctors Online.

If you have vaginal spotting, consult our doctor to determine the cause.
Talk to a Doctor

FAQs About Spotting Before Period Answered by Your Doctors Online Team

How does spotting differ from light period bleeding?

Spotting occurs irregularly and can occur in between cycles. Wheres as light period bleeding usually occurs at the time of the period.

What Can You Do to Prevent or Stop Spotting?

Maintaining a healthy lifestyle can help prevent a hormonal imbalance. Although, you should visit a doctor for diagnosis and proper treatment.

How do I know if I have low progesterone?

Spotting on the birth control pill: should you be worried?

Commonly, women may experience spotting while on any form of birth control. This can be due to external hormones introduced into the body.

When should I take a pregnancy test after spotting?

Waiting at least a week after your missed period is a better time to take a pregnancy test.

How many days is it normal to spot before your period?

Spotting a few days after a period can be expected and can be a part of residual bleeding.

Is it normal to spot a week before your period?

Several causes leads to spotting. Proper diagnosis and treatment are required depending on the cause.