Abnormal Vaginal Bleeding > Advice From a Doctor: Bleeding After Sex During Pregnancy

Advice From a Doctor: Bleeding After Sex During Pregnancy 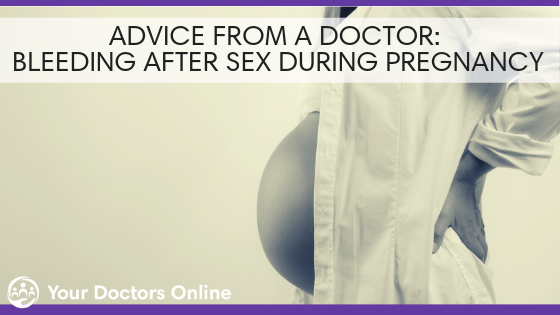 Vaginal bleeding after sex experienced when a woman is pregnant can be alarming. Our physician Dr. Cherilyn  Cecchini discusses what may lead to this symptom and what you need to know if you find yourself in this situation.

There are many reasons why a woman may experience vaginal bleeding after sex when she is pregnant. Bleeding during the first trimester can occur in up to 15 to 25% of pregnancies. One study determined that spotting is most common during the sixth and seventh week of pregnancy and the American Pregnancy Association noted that sex during a normal pregnancy is not a risk for miscarriage. Although vaginal bleeding when pregnant is common and often not a sign of a serious issue, it is important to check in with your healthcare provider if you experience any amount of vaginal bleeding when pregnant.

Implantation bleeding is one common cause of vaginal bleeding that women may experience at the onset of pregnancy.

Related: Exercises you can do during pregnancy to help with labor

Bleeding Caused by Changes to the Cervix

The cervix is the circular band of muscle that separates the uterus from the vagina. The cervix experiences many changes during pregnancy.

When a woman conceives, the cervix moves and remains in a higher position in the vagina. Increased blood flow to the cervix when a woman is pregnant leads to a softer texture and increased sensitivity.

Changes to the cervix may be the underlying reason a pregnant woman experiences irritation and vaginal bleeding after sex.

Vaginal bleeding experienced at any time when a woman is pregnant may be a sign of infection. Certain infections cause the cervix to become irritated or inflamed and vulnerable to bleeding, including:

A quick An accurate and timely diagnosis of ectopic pregnancy is imperative, since this  condition may be life threatening. If the fertilized egg implants in one of thefallopian tubes, it may cause the fallopian tube to rupture as it grows

An ectopic pregnancy may result after damage to the fallopian tubes, which  is sometimes caused by:

Fertility treatments, such as in vitro fertilization

The placenta is an organ that forms during pregnancy to provide oxygen and nutrients from the mother’s bloodstream to the developing baby. In most pregnancies, the placenta implants at the top or on the side of the uterus away from the opening of the cervix.

Placenta previa occurs when the placenta implants at the bottom of the uterus and partially or completely covers the cervix.

Vaginal bleeding experienced by a pregnant woman after 20 weeks gestation may indicate placenta previa. Sexual intercourse may cause vaginal bleeding in women with placenta previa throughout the pregnancy. Since the placenta is implanted near the bottom of the uterus, it may start to separate and bleed as the uterus stretches to accommodate the growing baby.

Bleeding Caused by a Subchorionic Hematoma

Subchorionic hematoma is also known as subchorionic bleeding, a condition that occurs when blood forms between the placenta and the uterus. It may lead to light spotting or it may cause no symptoms and it happens most often during the first trimester of pregnancy. Some subchorionic hematomas are diagnosed during routine ultrasounds. It typically resolves on its own without the need for any medical or surgical intervention.

Bleeding After Sex Caused by Miscarriage

Vaginal bleeding when pregnant may be a sign that a woman is experiencing a miscarriage or loss of pregnancy. Bleeding due to a miscarriage is often heavy and it may last for several days.

Signs and symptoms of a miscarriage also include:

Light bleeding in the second trimester may be caused by irritation or inflammation of the cervix whereas heavy bleeding may  related to the placenta.

Vaginal bleeding during the third r trimester may be a sign of preterm labor, full term labor, placenta previa or placental abruption. Certain infections may lead to vaginal bleeding at any time throughout the pregnancy.

If you experience any amount of vaginal bleeding at any point during your pregnancy, be sure to contact your healthcare provider immediately. Noting the amount of blood, the color of the blood and the duration of the bleeding are helpful in determining what may be the cause of the bleeding.

At any point during your pregnancy, you can quickly and easily access a trusted physician using Your Doctors Online. Our app is simple to use and connects you within minutes to a credible provider at any time.

We are confident that you’ll rest well knowing you have a doctor at your fingertips to answer all of your questions. Download our app today and sleep better tonight.