Period Problems > Why are Girls Getting Their Period Earlier?

Why are Girls Getting Their Period Earlier? 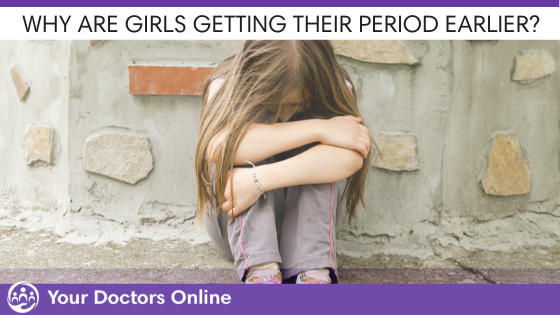 Why are Girls Getting Their Period Earlier?

Thank heaven for little girls, but what happens when childhood gets cut short with early puberty? More and more girls are putting down dolls to pick out bras and stock their cupboards with tampons as the age of onset puberty continues to fall.

The average age of a girl’s first period in the United States and Europe was about 16 a century ago. Today, it’s closer to 13.

So why are girls starting puberty earlier and is there anything that can be done about it? We asked our resident expert, Dr. Nerissa Bauer for her insight.

Puberty is described as the beginning of fertility and includes the development of breast buds, pubic hair, a growth spurt and first ovulation and menstruation.

The first stage of puberty for girls is the development of breast buds. In the United States approximately 50 percent of females will have attained this stage of development before age 10. While some parents may mistake extra fat for developing breasts, there are subtle differences.

It can be hard to tell at times, however the contour of the breast will be different. Your child’s doctor will also look for other signs of puberty in addition to breast bud development. Girls may complain of tenderness as well.

The onset age for puberty has fallen in many developed countries. Research shows in northern Europe first fell in the 1800’s and then another three years in the last century. Public health successes and changes in social structure are believed to be responsible for the change.

What are the Risks?

The earlier before age 12 a girl starts her period, the higher her lifetime risk for breast cancer. This is likely from the prolonged estrogen exposure.

The highest average risk for breast cancer is in non-Hispanic white women, 1 in 8, or 12.5%. In all girls who start their periods before the age of 12, taken together, the risk is 16.25%.

As she reaches maturity, she needs to be made aware of controllable risk factors for breast cancer, such as the use of estrogen-containing birth control pills (10 years of use would raise her risk to about 22%), first pregnancy after age 30 (if she did this, it would increase the risk to about 35%), high-fat diet, alcohol use, fertility drugs, pesticides, and radiation exposure. Each of these factors multiplies her accumulated risk.

Related: I’ve had my period for 30 days! What should I do?

Do you have questions regarding your period or cycle? Talk to our online doctor for answers
Talk to a Doctor

Why are we Maturing Faster?

While there is no clear cut reason, research is pointing to a host of possible causes working together.

One study showed that environmental stress could play a role in early menstruation. The study mainly looked at divorce rates and conflict between mother and daughter and established a link between these stresses and earlier menstruation.

For example, girls who grow up with domestic violence or without a biological father in the house are more likely to get their periods earlier than other girls. The theory is that the brain perceives this chronic stress as a low-grade threat, triggering the brain to start reproduction as soon as a possible link between toxic stress and the earlier onset of puberty.

Research by Louise Greenspan, M.D. determined the most significant risk factor for early puberty may be obesity. Fat is a very active hormonal gland, and fat cells convert other hormones into estrogen. The more fat tissue a girl has, the higher her chance of starting puberty earlier. We don’t know whether obesity is the actual cause or if there is some other common cause that triggers obesity and puberty in the first place (which obesity then makes worse).

Chemical flame retardants, for example, polybrominated biphenyls (PBBs) have been linked to earlier menstruation in girls and with earlier puberty. Similarly, high levels of dioxin exposure have been associated with elevated risks for breast cancer and early menstruation.

Early puberty, known as precocious puberty, is characterized by sexual characteristics in females before age 8 and age 9 in males.

According to Stanford Children’s Health, precocious puberty may be caused by tumours or growths of the ovaries, adrenal glands, pituitary gland, or brain. Other causes may include central nervous system abnormalities, family history of the disease, or specific rare genetic syndromes. However, no exact underlying cause is found in many cases.

It can also cause the child to stop growing before reaching their full genetic height.

Girls’ early maturation is categorized into two main types: rapidly progressive and slowly progressive. Most girls who begin puberty early (especially those who start before age 6) have the rapidly progressive variety. They go through each of the stages (including the closure of the growth plates of the bones) at a very rapid pace and thus lose much of their adult height potential. As a result, about 1/3 of these girls will end up shorter than the 5th percentile of adult height. Many girls, however (particularly those beginning puberty after their 7th birthday), will start puberty early but still go through each of the stages at a more typical pace. While their “adolescent” growth spurts are over early, they will continue to grow until their bones reach final maturity at about age 16.

Precocious puberty is ten times more common in girls than in boys. Sexual development may begin at any age. Pregnancy has been reported as early as 5 1/2 years old.

How to Handle (Early) Puberty

The most important thing is to open the lines of communication between you and your child. Let their questions guide the discussion. Sometimes kids are not ready or feel embarrassed. If this happens, you can offer your child an appropriate book and offer to read with them or let them read it, but check-in and then ask if they have questions about anything they read.

However, it is essential to help normalize the process and let them know you are willing and able to answer any questions or worries. You may consider sharing your own experiences and feeling confused or awkward, but everyone goes through these changes.
What are some best practices for helping a young child with their first period?

Talking with your child about how they are feeling is always first. They may be scared, confused or shocked. Help reassure them that you will be helping them know what to do and that it is a part of growing up. Helping your child have supplies such as pads, tampons or panty liners at the ready  in a small pouch to keep in a bag or locker and knowing what to do and how often will help.

How do you know if the arrival of an early period should be a cause for concern?

Puberty happens in stages and starts between 8-14 for girls. Breast budding usually occurs first in girls, with periods happening towards the end, usually two years later. If periods happen before earlier stages of development, such as breast development and appearance of pubic hair, or if signs of puberty arise before age 8, parents should see their child’s doctor. When this happens, it is called precocious puberty. These children will need a medical workup by a pediatric endocrinologist.

Is a 9 year-old child mature enough to handle the responsibility that comes with having her period?

Nine-year-old is on the early side of puberty, and thus, these girls may not yet be emotionally ready. Cognitive development happens in stages, and in the case of a young girl having her period at nine, her emotional growth is likely not at the same pace.
Parents should continue to express a desire to talk and help them understand what is happening and how they may feel, especially compared to other girls whose bodies have not started changing or just starting to change. Girls who are “early bloomers” may be more self-conscious and realize they are different from their peers. Making sure to be available to them emotionally will be necessary.

If my child menstruates early, does that mean they are going to stop growing?

Girls will have a growth spurt and expect to gain 2-2.5 inches a year. They can gain height during puberty but usually up to two years after menstruation.

Should you be Concerned?

Puberty is not an easy time-for mother or daughter. If you are concerned about your daughter’s development, you can always chat confidentially with one of our doctors. Don’t lose sleep over your child’s development. Connect with us for some medical advice within minutes.