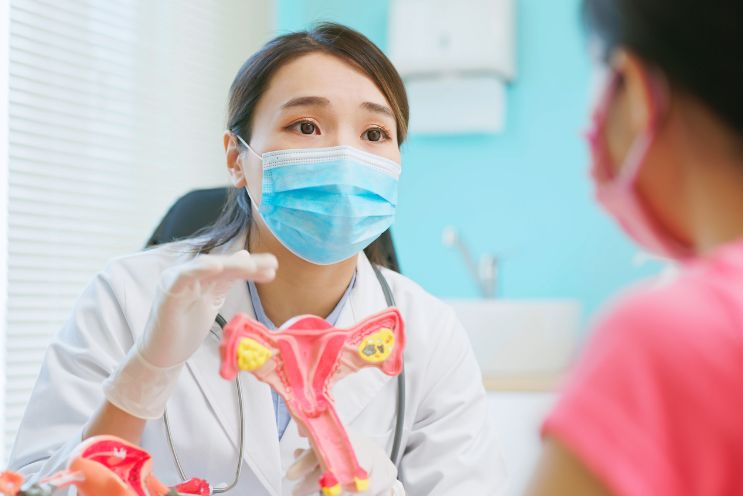 Are you up to date on pap smears? A pap smear is a test that screens for cervical cancer. Pap smears, education and HPV vaccination are crucial to lowering your risk of developing cervical cancer.

We asked one of our OBGYNs, Dr Candice Fraser, to lend her medical insights on cervical cancer.

What is the Role of the Cervix?

The cervix is located within the female reproductive system. It is located where the lower part of the uterus meets the vagina.

The cervix comprises strong muscles and serves several vital functions within the female reproductive system. For example, each month, the cervix allows for the passage of menstrual blood from the uterus. It also helps direct sperm into the uterus to allow for successful fertilization.

While the cervix’s opening is usually very narrow, during labor it will dilate to 10 cm to allow delivery of a baby.

What is Cervical Cancer?

The cervix is covered by cells that make up a thin layer of tissue. When cells are healthy, they will grow, divide and be replaced. Cancer causes this healthy behavior to change. The cells begin to divide more rapidly. The cells may spread to other organs or grow into deeper cell layers. Eventually, the cells form a tumor which is a mass of tissue.

How Common is Cervical Cancer?

Around 85% of women who die from cervical cancer reside in developing countries. This may be because of the unavailability of cervical screenings, prevention education, and HPV vaccination in their countries.

In fact, North America, Europe, and Australia have the lowest incidences of cervical cancer. This is likely due to the availability of programs in those continents which promote cervical screenings through pap smears that can identify and treat precancerous cells.

One of the most critical risk factors for cervical cancer is infection with a virus called Human papillomavirus (HPV). HPV is found in about 99% of cervical cancers. However, there are over one hundred different types of HPV, most of which are considered low-risk and do not cause cervical cancer.

However, there are high-risk HPV types that may cause cervical cell abnormalities or cancer. Two strains of HPV, HPV-16 and HPV-18 can be attributed to more than 70 percent of cervical cancer cases.

HPV is a sexually transmitted infection that is common in the general population. Approximately 79 million Americans are infected with HPV. The majority of those infected are in their late teens and early twenties.

How Do You Get HPV?

There are more than 40 HPV strains that can be sexually transmitted. However, only a few of these HPV strains show manifestations.

HPV is not spread through bodily fluids, and your partner does not need to have an orgasm for you to be at risk.

A study published in the journal Sexual Health looked at 51 HPV transmission studies. Researchers found HPV in the genital tract of 51 virgins. We know that HPV can be spread through the use of sex toys or oral sex, but this research also points to other possibilities. These include the spread from manual genital stimulation (several studies showed evidence of hand-to-genital HPV transmittance) and from hard surfaces.

The second possibility is that you could pick up the virus from an infected surface. While the research points to this possibility, it should not be considered a medical fact.

Even so, to be on the safe side, it probably makes sense to avoid contact with unknown surfaces. For example, cover your genitals completely in communal areas like the gym.

Knowing what symptoms to look for is absolutely vital when living with HPV.

Genital warts may be itchy or uncomfortable. They can resemble a cauliflower or they can be smooth and flat, affecting various areas of the genital region, including:

Most people will not experience symptoms during the early stages of cervical cancer. However, this is why it is so important to have regular cervical screenings for changes in the cells on the cervix.

It’s better to detect and treat precancerous cervical lesions early. Usually, the symptoms become visible when the cancer cells have grown through the upper part of cervical tissue into the tissue underneath in the cervical canal.

This happens when the precancerous cells remain untreated. The condition will worsen into invasive cervical cancer. Sometimes women mistake these common symptoms as being harmless and non-cancerous.

Other risk factors include:

Any condition that weakens the immune system can also increase your risk for cervical cancer. This includes being HIV positive, Hodgkin’s Disease and receiving an organ transplant.

Smoking can also increase your risk. Smokers are twice as likely to develop cervical tumors than non-smokers. There is also a link between women living in poverty and death from cervical cancer. This link may be from an inability to access proper screening services.

Risk factors do not accurately predict whether or not you are at risk for cervical cancer. Regular screenings are the best defense to protect yourself against cervical cancer.

How Is Cervical Cancer Diagnosed?

It is generally advised to begin screenings for cervical cancer at age 21.

What Happens if you Get an Abnormal Pap Smear?

If your doctor suspects you may have cervical cancer because of an abnormal pap smear result or your reported symptoms, you will likely need a pelvic exam. First, your doctor will likely need to examine your cervix thoroughly. A magnifying instrument called a colposcope is used to check for abnormal cells.

The results of the colposcopy will determine the next steps. This may include repeating a pap smear in 1 year or performing a more extensive biopsy to remove the HPV-infected cells. Women diagnosed with cervical cancer will be referred to a GYN Oncologist for further management.

A LEEP( Loop electrosurgical excision procedure)  uses a wire loop heated by an electric current to remove tissue in the lower genital tract. It is considered an effective way to prevent cervical cancer. The success rate for LEEP is great, with a 90% cure rate.

What are the stages of cervical cancer?

Living with HPV: Being diagnosed with HPV does not mean you cannot live a normal life. Let our doctors guide your next steps.

I have HPV. Does This mean I will get cancer?

Certainly not! Contracting HPV does not necessarily mean you will get cervical cancer. There are over 200 strains of HPV, and only 40 -100 strains affect the genital area.

The strains that are not sexually transmitted can cause skin conditions such as warts on the hands or feet.

Only the 40-100 strains that affect the genitals (penis, scrotum, anus, rectum, vulva, vagina and cervix.) are sexually transmitted. However, some strains can lead to genital warts or cervical cancer.

According to Planned Parenthood, HPV infections are common. In fact, most sexually active adults who do not receive the HPV vaccine will come into contact with HPV at some point in their lives.

The good news is many HPV infections show no symptoms. Often, your body can fight off the infection on its own. This is why many are unaware they were ever infected.

Unfortunately, some strains of HPV will cause symptoms that require treatment.

Cancer: Most cancer caused by HPV is due to two strains: types 16 and 18. These are considered high-risk HPV. While many are aware that HPV can lead to cervical cancer, many are unaware that there is also a risk of cancer in the vulva, vagina, mouth, throat and anus.

How can I avoid HPV and the health problems it can cause?

If you are sexually active:

Who should get vaccinated?

HPV vaccination is recommended at age 11 or 12 years (or can start at age 9 years) and for everyone through age 26 years, if not vaccinated already.

It is suggested that you are vaccinated before becoming sexually active. However, some adults 27 through 45 may choose to get vaccinated after speaking to their healthcare provider.

HPV vaccination in this age range provides less benefit as most sexually active adults are already exposed to the infection. At any age, having a new sex partner is a risk factor for getting a new HPV infection.

According to the Center for Disease Control (CDC) the best way to protect against HPV is to get vaccinated before becoming sexually active. However, if your partner is not infected, they may want to consider having the vaccination even if they are sexually active.

It is important to note that the vaccination requires more than one dose and will not be fully active until your partner has received all their vaccinations.

In fact, even those with HPV can still benefit from the vaccine as it may offer protection from other strains they do not have. But unfortunately, the HPV vaccine cannot provide any treatment or protection from the HPV strain you already have.

Tell your partner and encourage them to get vaccinated for the virus. Understand that HPV symptoms like genital warts could arise in those with human papillomavirus types six and 11.

Is There a Cure for HPV?

Unfortunately, there is no cure for HPV, but there are ways to manage your symptoms. Healthcare providers can remove genital warts. However, removal procedures may be uncomfortable, and warts can reappear.

Cervical cancer can be screened for with pap smears. Getting regular screenings is important, especially if you have HPV. Pap smears can identify precancerous as well as cancerous cells on the cervix.

Around 85% of women who die from cervical cancer reside in developing countries. This is likely due to an inability to receive cervical screenings, prevention education and the HPV vaccination in their countries.

Do you have questions about HPV or cervical cancer? Talk to a doctor immediately if you think you may have HPV or are experiencing signs or symptoms of cervical cancer. Connect with one of our doctors for 24-hour access to medical advice.

FAQs About Cervical Cancer Answered By Your Doctor Online Team

What are the symptoms of HPV in women?

Some symptoms include:
a cluster of growth which looks like a cauliflower, also called warts
pain during sex
unusual discharge from the vagina
unusual vaginal bleeding after intercourse
pain in the pelvic region

What is a cervix?

Most men do not develop any symptoms. In males, warts from HPV, which have a cauliflower-like appearance, can appear on the penis, scrotum, inside or outside the anus, groin or thighs.

Does HPV cause cervical cancer?

HPV is found in about 99% of cervical cancers. There are over one hundred different types of HPV, most of which are considered low-risk and do not cause cervical cancer.

How common is HPV cancer in men?

According to CDC, more than 4 out of every 10 cases of cancer caused by HPV occur among men. Every year in the U.S., over 14,000 men get cancers caused by HPV.

Can you die from cervical cancer?

Around 85% of women who die from cervical cancer reside in developing countries. This may be because of the unavailability of cervical screenings, prevention education, and HPV vaccination in their countries.
In fact, North America, Europe, and Australia have the lowest incidences of cervical cancer. This is likely due to the availability of programs in those continents which promote cervical screenings through pap smears that can identify and treat precancerous cells.

What are the symptoms of cervical cancer?

What is the cervical cancer survival rate?

What are the chances of cervical cancer after LEEP?

A LEEP is a safe and effective procedure to prevent cervical cancer. The success rate for LEEP is promising, with a 90% cure rate.