endocrinology > I Was Losing Body Hair Due To Adrenal Fatigue!

I Was Losing Body Hair Due To Adrenal Fatigue! 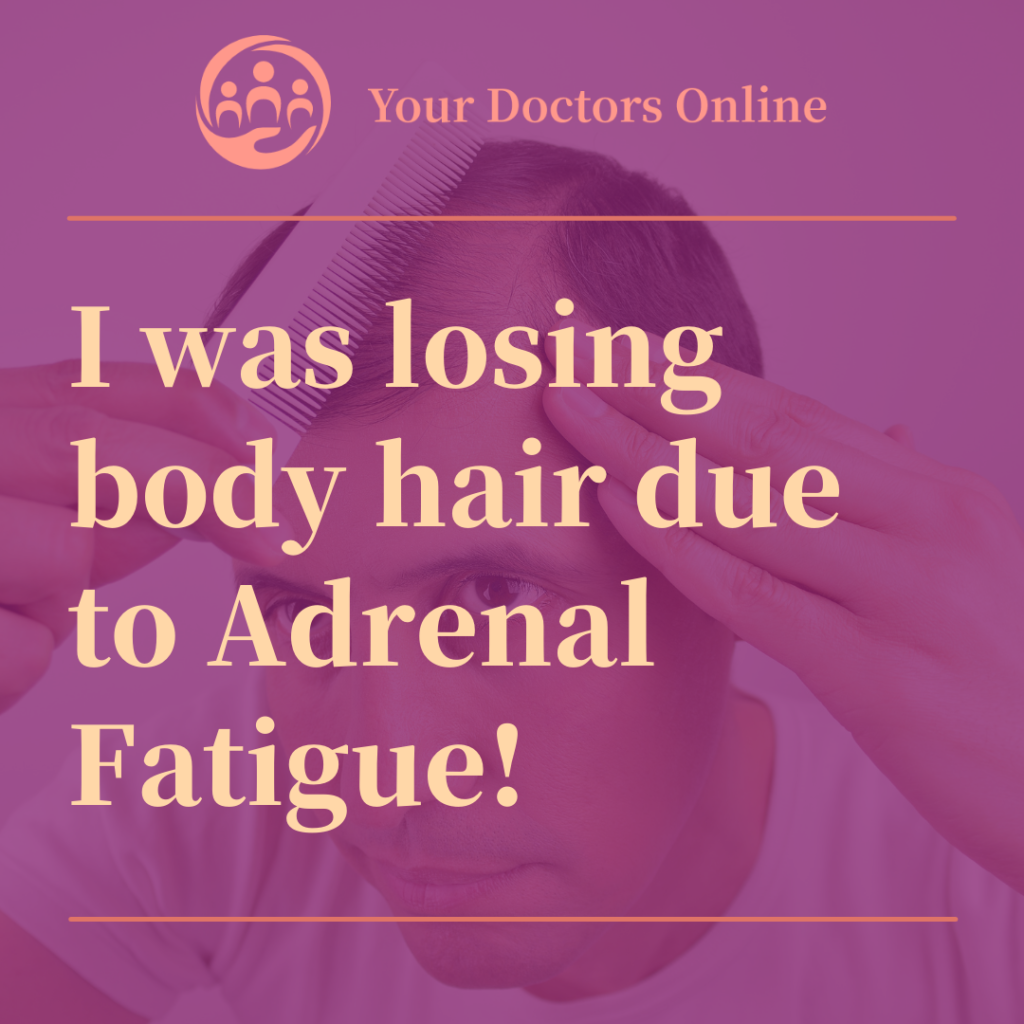 Read how Your Doctors Online diagnosed Ivan with Adrenal Fatigue.

I was living in constant fear due to COVID 19.

I am a 32 years old male. My story begins nine months back when I lost my 65 years old mother to this lethal viral disease, Covid 19, I was devastated, but the testing times did not end there. Two weeks later, Covid took over my 24 years old nephew.

This added greatly to the misery and stress I was already in. It was very difficult to perform daily activities, and I started living in fear. For over nine months, I was in chronic stress and fatigue.

My symptoms were getting worse, and I started losing body hair!

During that time, I started developing symptoms like body aches lasting most of the day. I lost almost 10 kgs without trying. I also felt lightheaded and dizzy.

Recently, I had developed two new symptoms, which were alarming. One was, I started losing body hair. The second one was, I developed a craving for salty food like chips etc.

I tried multiple doctors, but no one was able to answer my queries.

I had been looking for answers for nine dreaded months. Thanks to good insurance coverage, I consulted multiple doctors, including Psychiatrists for Depression and Anxiety, Dermatologists for skin conditions causing hair loss, Neurologists for body aches, muscle fatigue etc. No one gave me satisfactory reasoning for the cause of my symptoms. Late night, while munching on salty chips, I came across Your Doctors Online website. With not a lot of hope, I decided to give it a try.

To my utter amazement, the conversation lasted 45 minutes. The doctor asked all the relevant questions and went through the minute details.

She informed me of a disease called ‘Adrenal Fatigue,’ which I had never heard before and asked me to get one last test done called a Cortisol Hormone test. We set up a follow-up after a week. The doctor’s thoroughness amazed me, as she had very little to work with, and I agreed to get the test done.

Thanks to Your Doctors Online, I found my cortisol levels were extremely low.

Six days later, I was back on my cellphone, chatting with my Your Doctors Online physician. My results were back, and it showed that my Cortisol levels were way too low. The normal range is 5-25 micrograms /deciliter; mine was 3.9mcg/dl.

Now, she officially diagnosed me with Adrenal Fatigue. I was happy that someone finally diagnosed me. The doctor further told me that it is a condition in which the adrenal glands are not producing enough cortisol hormone. Causes include chronic stress or chronic illness.

The treatment advised by her was simple. According to her instructions, I had to take a low sugar diet and supplements containing Vitamin B6, B5, and B12 for three months. Plus, I had to repeat the Cortisol Hormone test after three months and follow up with her again.

That day I signed off smiling, content and had a good long sleep.

It has been three months, and I am finally recovering. I now consult Your Doctors Online without a moment’s hesitation for any issue. I owe my awesome recovery to the extraordinary Your Doctor Online team.