OBGYN > Is PCOS Painful? Everything You Need to Know

Is PCOS Painful? Everything You Need to Know 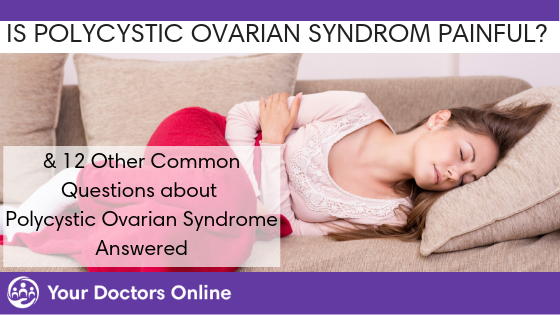 Is PCOS Painful? Everything You Need to Know

Could you be one of the approximately 10 % of women who suffer from Polycystic Ovarian Syndrome? Check out some common PCOS questions.

Polycystic Ovarian Syndrome is a common yet serious health condition that affects the reproductive cycle in women. While it may be a condition that affects approximately 10 % of women, its symptoms, causes and treatment options are not commonly known. At Your Doctors Online, we are happy to share some of the answers to the most common questions about PCOS.

PCOS affects the reproductive system of women. When the female body produces an excess of male hormones, it can cause a disruption in ovulation along with a variety of symptoms that occur both internally and externally in the body.

While we know what causes the symptoms of PCOS, healthcare professionals are still not quite sure what causes the overproduction of androgens which triggers the PCOS and its associated symptoms. While there is not one known cause for PCOS, research has shown several factors that are closely associated with PCOS.

Does your mother or sister suffer from PCOS? Chances are if a close relative has PCOS, you will too. That is because several studies have shown a genetic link in PCOS. Those who share a close genetic link may also share genes that are associated with PCOS.

One encouraging study found evidence that the environment in the womb may be linked to the development of PCOS as an adult.

The study was led by Dr. Paolo Giacobini at the French National Institute of Health and Medical Research. In the study Dr. Giacobini measured the hormone called anti-Mullerian hormone (AMH) during gestation. Usually, in pregnancy, the levels of AMH decrease. But the authors noticed that in women with PCOS, the levels of AMH did not decrease.

The researchers used mice to reproduce the elevated level of AMH levels during pregnancy. When these conditions were presented in mice, their offspring went on to have PCOS symptoms.

One common condition present in up to 70 % of women with PCOS  is insulin resistance.

Insulin is produced from the pancreas to help the body absorb the sugars in the foods we eat. When you have insulin resistance, your body’s cells are unable to respond properly to insulin. When insulin from the body is not absorbed properly, the demand for insulin increases. The overproduction of insulin is tied to an increase in the production of male hormones.

Obesity is a major cause of insulin resistance. Insulin is a common factor in 70% of PCOS cases. Between 40 and 80% of women who suffer from PCOS were reported to be overweight or obese.

Obesity and hormone issues. are closely linked. Your hormones have the ability to determine your appetite, metabolism and fat distribution.

Related: Do you Have PCOS? Check out 10 Common Symptoms

How is PCOS Diagnosed?

In order to diagnose this condition, your doctor will require a complete medical history as well as a thorough medical exam.

Your doctor will monitor any symptoms you are experiencing which could include:

For further analysis, doctors might recommend ultrasound and blood tests. These tests help in determining the functioning of ovaries and can also detect any abnormalities.

PCOS is not physically painful. According to The Women’s Health and Research Institute of Australia, PCOS is not actually painful. Many women may mistake the pain associated with their menstrual cycle or with a cyst for PCOS pain.

This is because PCOS is not actually associated with cysts in the ovaries. The fluid filled sacs are actually a follicle which contains an egg. These follicles are a normal part of your ovaries and are not painful. In normal ovaires there are a few follicles present. With PCOS more follicles develop and cause issues with the proper maturation of the eggs and can delay or stop ovulation.

While PCOS may not be physically painful, it can cause emotional trauma. It can affect girls as young as 11 years old. PCOS can affect the appearance causing persistent acne, facial and body hair growth and even hair loss. These symptoms can cause self esteem issues.

PCOS is the leading cause of infertility among women. It is generally believed that PCOS affects about 10 % of the female population but one study has suggested it may actually affect up to 24%. This can be emotionally and financially devastating for couples hoping to start a family.

Studies have determined a genetic link for PCOS. If your mother or sister has PCOS you have a higher chance of also suffering with this condition as you share many of the same genes.

While the exact cause for PCOS is still not known, one study  has pinpointed a potential cause and is working towards a possible future cure.

The study looked at the conditions in the womb and whether they had any effect on the potential to develop PCOS.

In the study led by Dr. Paolo Giacobini at the French National Institute of Health and Medical Research, the hormone called anti-Mullerian hormone (AMH) was measured during gestation.

While AMH levels usually decrease during pregnancy, it was discovered that in some women this does not happen. Researchers tried to determine if this could cause PCOS in their offspring.

The study reproduced the conditions using mice and found their offspring had PCOS symptoms which affected their fertility.

When treated with medicine to block the elevated hormone the offspring went on to have normal hormone levels and births.

This study is an encouraging step towards a future cure for PCOS. Currently, doctors are only able to manage the symptoms.

Is there a Cure for PCOS?

There is currently no cure for this serious women’s health issue. This may be large because researchers are not currently sure what exactly causes PCOS to develop.  PCOS is associated with several risk factors such as insulin resistance, obesity, and having a close relative who also has PCOS.

One study was able to make great strides by determining a potential cause for PCOS. The study looked at hormone levels in the womb and determined that a hormone imbalance in the womb may be possible for PCOS symptoms in the offspring.

In a study using mice, the researchers were able to reproduce this elevated level of hormones during pregnancy and found that the offspring had PCOS symptoms. When treated with medicine to block the elevated hormone the offspring went on to have normal hormone levels and births.

This is an encouraging step towards a possible future cure. Currently, doctors are only able to manage the symptoms. Natural approaches to PCOS can also provide treatment for many of the symptoms.

Is PCOS Associated with Being Overweight?

Not everyone who struggles with PCOS is overweight but many are. One study on PCOS reported that between 40 and 80% of respondents were overweight or obese.

Obesity is closely tied with hormone issues. This may be because the hormones in your body are able to determine your appetite, fat distribution and metabolism. In addition, hormone levels can actually encourage the accumulation of body fat in obese people.

How Common is PCOS?

Another study suggested that many women may have PCOS and not even know it. The study estimated about 70 % of women who have PCOS are undiagnosed.

What Can Happen if PCOS is not Treated?

Despite the many symptoms associated with PCOS, experts believe that many cases actually go undetected and therefore untreated. This is a dangerous situation as leaving PCOS untreated can lead to many potential health risks.

PCOS is associated with:

PCOS can produce many complications including:

Can you Get Pregnant if you Have PCOS?

PCOS is one of the most common causes for infertility. In fact an estimated 74% of women with PCOS will experience fertility issues.

Some women are able to become pregnant with medical interventions. In Vitro Fertilization (IVF) is a possible treatment option. With IVF the sperm and egg are taken from the body. Once an embryo is formed it is then inserted into the uterus.

While some women require IVF in order to conceive, others are able to get pregnant with a combination of lifestyle changes and fertility medication.

Does PCOS Cause Hair Loss?

PCOS is caused by a hormone imbalance within the body. In women with PCOS an access of male hormones called androgens are produced.

Androgens are within the female body to signal puberty as well as hair growth in the underarm and pubic areas.

When too many androgens are produced, a woman may take on more masculine traits. These can include hair growth on the neck, chest, stomach, and face.

These same hormones can also cause the hair on the scalp to begin thinning. This is called female pattern hair loss or androgenic alopecia. This often occurs near the front of the scalp. While this symptom may seem daunting to handle, there are several medications that can help ease the symptoms of PCOS, even hair loss. There are also many natural approaches to PCOS.

Does PCOS Cause Acne?

One common side effect of PCOS is persistent acne, both in teens and young women as well as adults.

Internally an excess of androgen can cause menstrual cycles to become irregular or stop completely. It can also cause the ovaries to become enlarged with fluid-filled sacs containing follicles and immature eggs.

Externally too many male hormones can cause females to take on more masculine traits. They may notice facial or body hair growth, hair loss, and acne.

These symptoms affect between 5 and 10% of teens and young women. They may not always seek out professional help because of the embarrassment surrounding their symptoms.

There is no cure for PCOS but it is very treatable. Connect with one of our doctors today to discuss your symptoms confidentially and without judgment.

Can You Use Natural Treatments for PCOS?

Natural treatments and lifestyle changes can help to ease the symptoms associated with PCOS. For example, many women who suffer from PCOS are also overweight. Women with PCOS may go months without a menstrual cycle or it may stop altogether.

One study that examined the link between weight loss and PCOS found that losing just 5 to 10 % of your body weight can be enough to trigger ovulation.

Of course, not all women with PCOS are overweight and many still need additional interventions such as fertility drugs or procedures to become pregnant.

Who Can I Speak to About My Concerns About PCOS?

The polycystic ovarian syndrome is a leading cause of infertility in women and yet many healthcare professionals believe it is largely undiagnosed. Many women do not recognize the signs of PCOS or are too embarrassed to discuss their symptoms with their family doctor.

Polycystic ovary syndrome is a common yet serious health issue for women. PCOS can put you at higher risk for several health problems. It can lead to diabetes, high blood pressure, stroke, sleep apnea, endometrial cancer, and depression, and anxiety.

At Your Doctors Online, we understand the need to speak to a doctor confidentially about sensitive topics. Our chats are confidential, yet informative. We are available 24 hours a day. Instead of sleepless nights, rest well knowing all of the healthcare answers you need are available at the press of a button.

Consult with Our Doctors for PCOS Issues.
Talk to a Doctor