Uncategorized > Your Doctors Online Guided Me About My Prolonged Periods!

Your Doctors Online Guided Me About My Prolonged Periods! 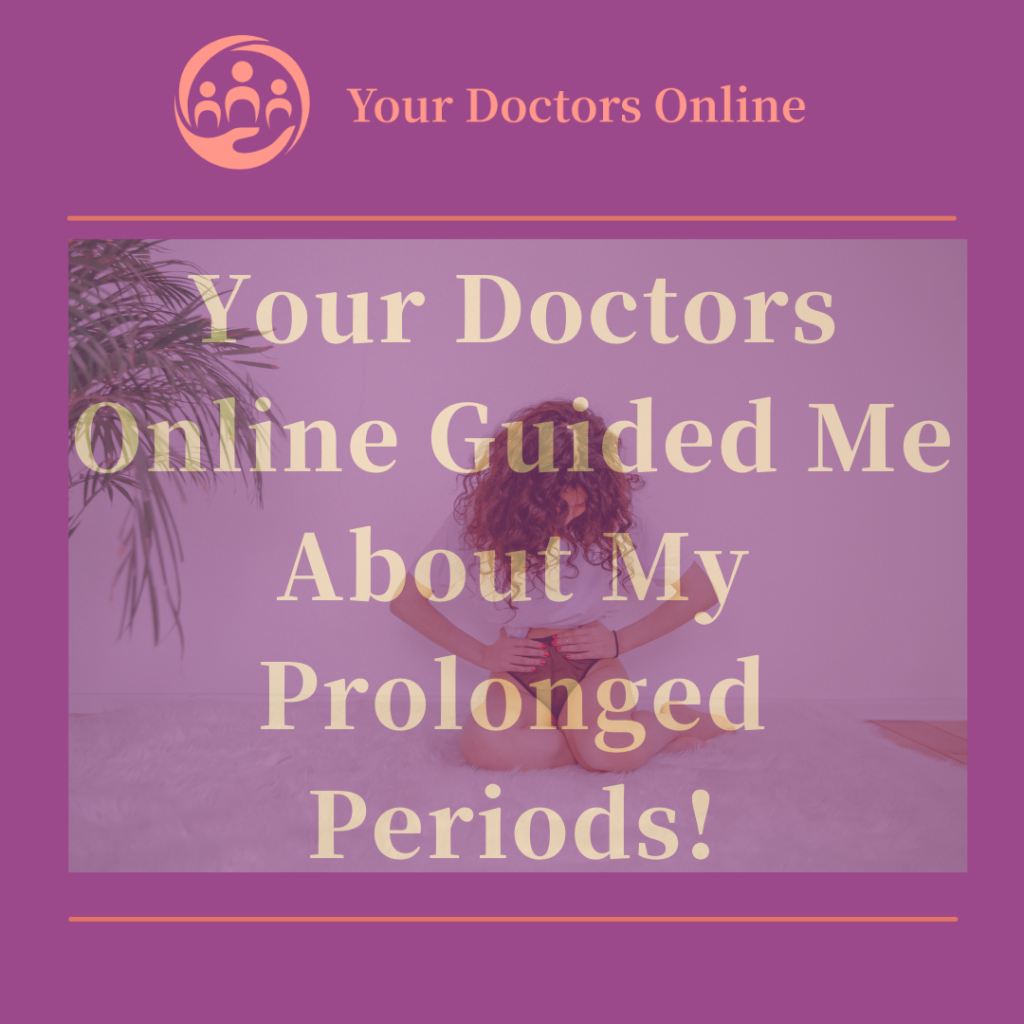 Your Doctors Online Guided Me About My Prolonged Periods!

Read on how Your Doctors Online helped Natasha discover the cause of her prolonged periods.

I am Natasha, and I have always had prolonged periods since puberty. However, my periods would always last longer, were irregular and either too heavy or too light. I had no idea what could be causing my prolonged periods.

Throughout college, my period would show up at irregular intervals. It was so embarrassing for me as sometimes I would be on my period for an entire month.

My life was miserable as I was always on my periods.

I remember the day I had just started swimming class, and I was sure that my period had ended. So I went to the changing room, and Ellie (my friend) saw a stain on my shirt.

“How could you go swimming in this condition?”

I got confused and looked at my stained shirt and burst into tears. I was on my period again! My life had become miserable, and all I could do was weep. Finally, I decided to go to the doctor to find out the cause of my prolonged periods. My doctor told me that my blood tests were clear.

One day I went back home and discovered Your Doctors Online.

One day sitting sad and depressed, I finally decided to seek help online. So I tried looking for doctors online, and I discovered your Doctors Online website. So I signed up and started to chat with Dr Fariah Hanif.

Dr Fariah was very helpful, and she asked me the following questions:

I answered all her questions. The doctor then asked me for my test results, to which I told her that all my hormones were normal. She asked me to attach the document containing all my test results, so I did. Then, she told me that I did not get a thyroid test or an ultrasound. She told me an ultrasound would rule out any abnormality as polyps and fibroids and that I needed to get those tests done.

I booked an appointment with a radiologist at the nearest lab to get these tests. Dr. Hanif she booked me with a follow-up appointment.

I booked an appointment at the earliest.

Dr Fariah told me to get an ultrasound and a thyroid profile. I got the tests done and then waited for the results. The radiologist said I had a polyp, just as Dr Fariah predicted. However, I wanted further information, so I contacted the doctor at Your Doctors Online again to understand what was wrong.

The doctor at Your Doctors Online guided me on my condition.

I got back to Dr Fariah as soon as my results came in. I attached a picture, like she said, and asked her to take a look. After looking at my reports, she told me the cause of the prolonged periods. She then said to me that any bleeding that isn’t part of regular menstruation, such as bleeding mid-cycle or between periods, is called dysfunctional uterine bleeding. In my case, it was due to thyroid imbalance and polyps.

Dr Fariah further told me that when women have polyps in their uterus, they may experience staining before and after their period, making them seem longer. They may also experience spotting in between periods. She then referred me to the OB/GYN consultant on Your Doctors Online website, from where a gynaecologist guided me further.

I am very grateful to Your Doctors Online platform. They have been so helpful in every regard till now. I am so impressed with how they take their time and help the patient reach a diagnosis. I will be grateful forever and will continue using this for life.

Information Regarding A Period Added By Our Online Doctor:

How long do periods last?

Periods usually last up to 7 days. A prolonged period is a period that lasts longer than seven days. If the bleeding is heavy, your doctor may refer to it as menorrhagia.

Intermenstrual bleeding is uterine bleeding at irregular intervals, particularly between the expected menstrual periods. It is a cause of vaginal bleeding and may usually occur due to hormonal imbalances, uterine fibroids, polyps, stress or any other pathological abnormality.

Treatment Options for a Prolonged periods

Treatment options for an extended period can vary. The OB/GYN will treat the underlying cause, whatever it may be. The doctor may also recommend a treatment to reduce your current bleeding, regulate your period, or relieve any discomfort if present.

Hormonal birth control pills are prescribed to regulate a period. NSAIDs such as Ibuprofen also reduce the bleeding. A doctor may also prescribe tranexamic acid to reduce the bleeding. In addition, reducing stress can help ease the mind and impact hormones, thus preventing long period episodes. In the case of thyroid function disorders, the mainstay treatment is to balance the hormones. Additionally, exercise, hydration, a proper diet also play an essential role in maintaining the health of the menstrual cycle.

In some cases, your doctor may recommend a surgical procedure to decrease the length of a period. A procedure known as dilation and curettage can thin the layer of your uterus and reduce much of your bleeding during your period. Women who have decided not to have more children may opt for endometrial ablation, resection, or a hysterectomy.