Vitamin deficiency > Vitamin D > I Tried Your Doctors Online And Found Out I Had Vitamin D Deficiency.

I Tried Your Doctors Online And Found Out I Had Vitamin D Deficiency. 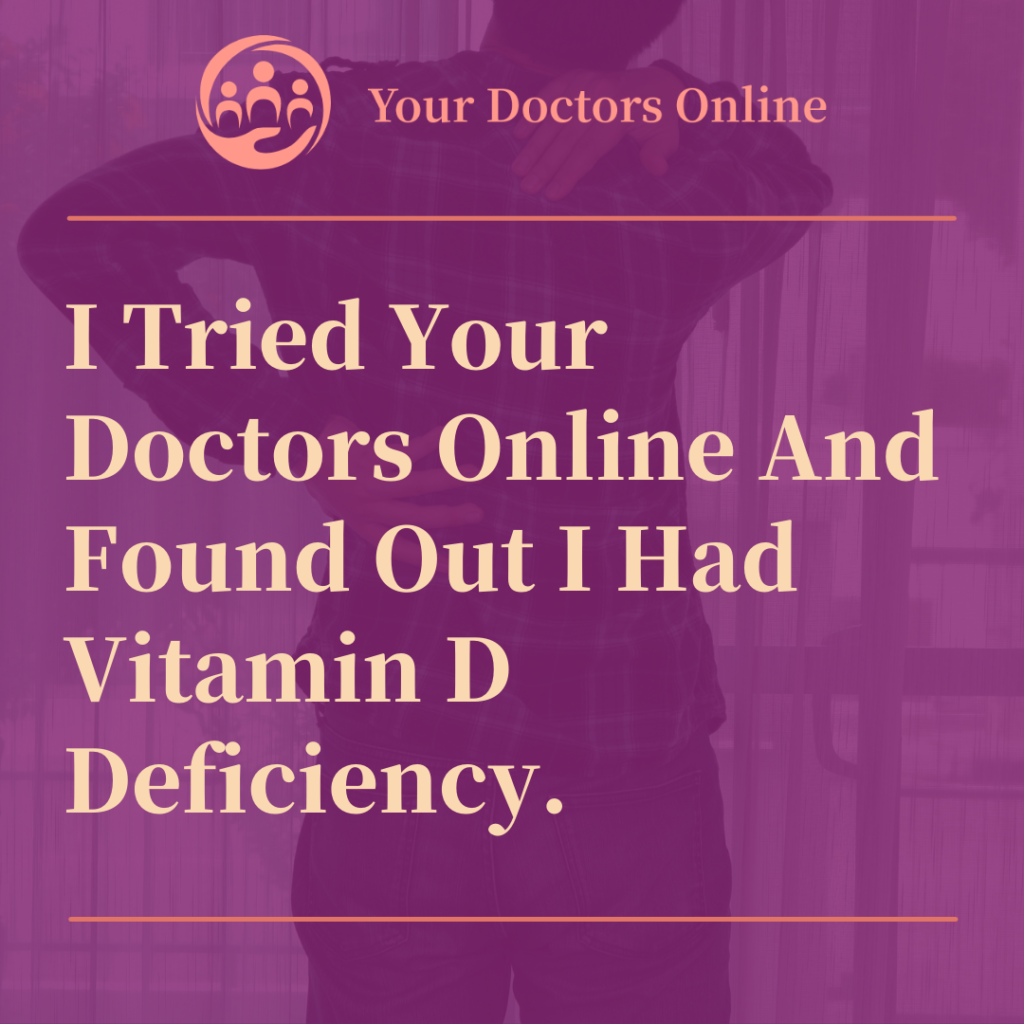 I am a 52-year-old male, but it feels like I am 70. For the past few months, I have suffered from unexplained fatigue with body and bone pain. I am a truck driver by profession, and I always blamed my driving for my body aches.

During my time on the road, I developed a very bad itch that got worse with driving in the heat. I didn’t have a rash, but the itching was unbearable. Also, I had constant heartburn, even though I am not a smoker. These problems made my life and work complicated.

With no time off and expired insurance coverage, I searched for my symptoms online.

I usually have my driving schedule pre-booked for weeks, so I knew I wouldn’t have the time to visit a doctor personally. My insurance card expired last year, so the only option left was to look up treatment online. While scrolling, a doctors’ platform called ‘Your Doctors Online’ caught my attention.

I downloaded the online doctor’s application, filled out the required details, and connected to a doctor.  My conversation with the doctor was nothing different than what I would have experienced at a doctor’s office. The basic introduction was followed by a list of questions for detailed history and background. One by one, the doctor addressed all my concerns.

My unhealthy lifestyle was causing the cause of heartburn.

The doctor reassured me that she would help me with all my health-related problems. She started asking me details about my diet, and I was embarrassed to tell her that I lived on deli food. I had not cooked a single meal or had home-cooked food in the past three months.

The doctor immediately diagnosed me with a condition called GERD and told me that the only way to completely treat it was by changing my lifestyle and meals entirely. Avoiding oily and spicy food was the most difficult thing to do for me. Lifestyle changes and omeprazole 20mg daily before breakfast worked wonders for me.

I had no idea low Vitamin D was causing constant body and bone pain.

I continued telling the doctor about my symptoms. It all started with a mild body pain that I kept ignoring. With time, my energy levels went down, and driving became really difficult for me. At times, I wouldn’t even have enough strength to shift the gears. For the past few weeks, my entire body hurts, and it feels like bone pain.

‘Vitamin D Deficiency,’ was my doctor’s prompt response. I can’t even remember the last time I took a multivitamin. To confirm the diagnosis, she advised me to get some blood tests done, which further confirmed that I was vitamin D deficient. The doctor then prescribed me ampules of Vitamin D that I had to drink with milk once a week, followed by oral tablets daily for four months. It had already been two months, and I feel much better now.

The online doctor even prescribed me medications for itching!

My last concern was regarding itching. It was terribly annoying, but Dr. Shamsi prescribed me Tab Loratidine, which I easily got from the pharmacy the next day.

I will turn 53 in a couple of weeks, and I feel like I am 40 again. All I can say is bravo to the masterminds behind this app and the amazing online doctors helping and following up with non-compliant patients like me.