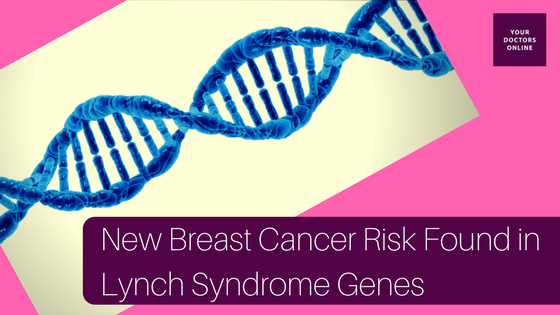 Want Free Healthcare for 3 Months? Now You Can!

The recent study published in Genetics in Medicine (2018) identified two new breast cancer genes that may put women at increased risk for developing the deadly cancer.

Breast cancer affects one in eight women in the U.S., which is roughly 12.5 percent of all women. Nearly 41,000 women are expected to die from breast cancer this year alone.

According to the Centers for Disease Control and Prevention (CDC), “For women in the U.S., breast cancer death rates are higher than those for any other cancer, besides lung cancer.”

The two new genes that may increase women’s breast cancer risk were also associated with Lynch syndrome in the past. Previous research had found a similar connection, but other studies were inconclusive.

What are the Connections Between Breast Cancer Risk and Lynch Syndrome?

Lynch syndrome is inherited and raises colorectal, stomach, ovarian, and endometrial cancer risk. It is actually the most common inherited cause of colorectal cancer. In fact, one in every 440 Americans has the gene.

Those with Lynch syndrome are probably not thinking they may also be at a higher breast cancer risk. However, genomic analysis is becoming more common for cancer, and there are new ways to associate genes with cancers, like breast cancer.

The study analyzed more than 50,000 women who had multi-gene cancer testing during a two-year period. The analysis found that 423 women did in fact have the mutation of MLH1, MSH2, MSH6, and PMS2 Lynch syndrome genes.

5 Subtle Heart Disease Symptoms that Can Kill You

“The new study suggests MSH6 and PMS2 should be added to the list of genes to screen for when there is a history of breast cancer,” Dr. Chung, director of the clinical genetics program at New York Presbyterian Columbia told media outlets. “Screening for these genes also would give these families potentially life-saving information to prevent colon cancer by encouraging individuals with the genes to increase the frequency of their colonoscopies.”

Testing for Lynch syndrome is not common. It is only done if someone has an individual or family history of uterine or colon cancer. Are you at higher risk for breast cancer due to these two new genes?

Related: Pain and Nipple Discharge Convinced me to Talk to Doctor

To find out, ask a doctor today. Our free online Dr. Chat is available 24/7 to answer all your medical questions. We also offer 3 months free health care from our panel of North American specialists and general physicians. Click below and get the health and wellness answers you need and deserve.