Uncategorized > After suffering from rashes on my face for a year, Your Doctors Online came to my rescue.

After suffering from rashes on my face for a year, Your Doctors Online came to my rescue. 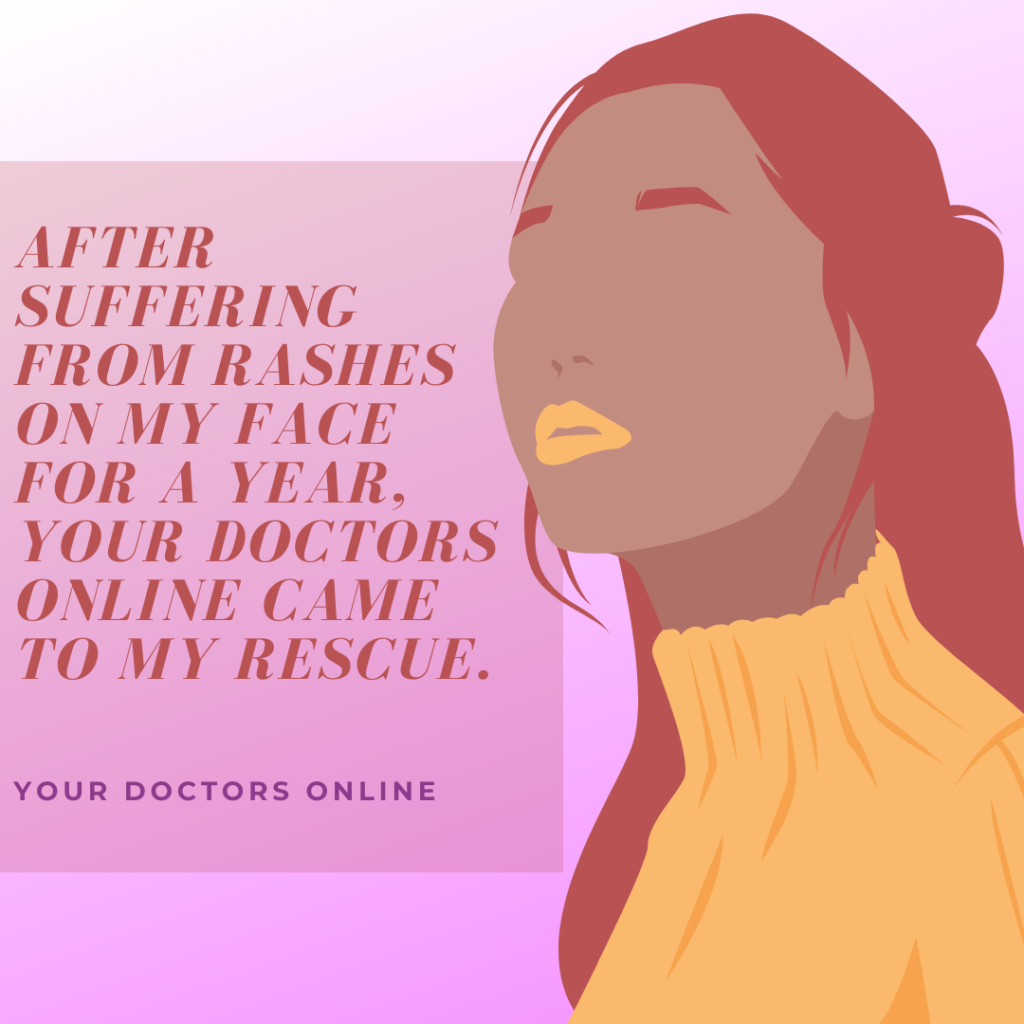 It’s emotionally and mentally frustrating when you have spots or skin rashes on your body especially, your face.

I’m a 19-year-old girl, and my issue started around a year ago. I would randomly get rashes on my arms and hands that were not itchy or painful but didn’t look aesthetically appealing.

Then it started on my face as well. I would get really stressed because of it, and my self-esteem was shattering because I didn’t feel confident while stepping outside the house with a red rash over my cheeks.

Some days it would disappear, but then it would show up again during important events. I was constantly being stared upon and asked about my skin condition.

I tried covering up the rash using make-up and used home remedies like tea tree oil and aloe vera gel as it is known to fade scarring and rashes. I invested in expensive skincare products hoping it would help. But in vain.

I consulted different doctors; some said it was due to sun exposure; others labelled it as an allergic reaction. I did many antibiotics courses and tried every brand of anti-allergic medication, but the rash did not respond to anything.

I discovered Your Doctors Online and found out I had a Malar rash.

While trying to seek help from Google, I discovered Your Doctors Online. Within minutes of downloading the app, I was speaking to a doctor. She was very professional and made me feel at ease from the start before starting to dig up my history.

The doctor asked about any known allergies or infections I’ve had. Apparently, vitamin deficiencies can also cause rashes. She gave me an explanation about different types of rashes and their triggers.

What I had was a malar rash which, according to her, had several causative factors. She asked questions to rule out the different causes. She further continued and asked about my family history of autoimmune diseases, which was positive. I also had other associated symptoms, such as body pain and chronic joint pain.

My blood tests confirmed the diagnosis, and I finally got the right treatment.

After a detailed history and evaluation, she recommended I get a set of blood tests done, including a Full Blood Count, ESR, and CRP, which are markers of infection and inflammation and autoimmune antibody tests to confirm the underlying cause.

She told me to make lifestyle changes by avoiding certain foods which can trigger the rash. I started limiting my intake of red meat, processed and sugary foods. I was advised to always use sunscreen before going out in the sun and avoid makeup products that I had been using at large, as they can further irritate my skin.

Stress was one of the primary triggers for my rashes, which the doctor pointed out. It was true. I was overly stressed because of this, and it wasn’t helping to make my condition better.

She continued to follow up with me, and my results came, which showed increased ESR and CRP levels along with positive ANA antibodies. It turned out I had an autoimmune disease, for which I was prescribed rounds of steroid medication and immune-suppressive drugs.

Even though it is a lifelong disease, with Your Doctors Online, I will be able to manage my illness.

My doctor counselled me regarding my disease. It is a lifelong disease that can affect many body parts, but one can live a healthy life with it by preventing flare-ups with lifestyle modification and reducing stress, as that is one of the biggest triggers.

After following the advice and taking the medication, my skin rashes subsided. However, I do have flare-ups once in a while, and I continue to seek help and support from Your Doctors Online even now if I have any issues coping with the challenges of my illness, and the doctors are always there to help me and guide me in the right direction.