STDs > Everything That You Need To Know About Chlamydia In Men!

Everything That You Need To Know About Chlamydia In Men! 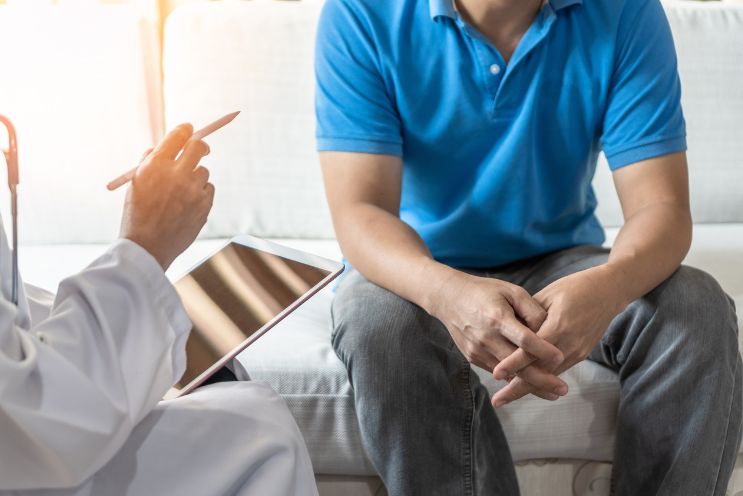 Only half of the men will get any symptoms of the most common STD. Learn the signs, symptoms and treatment of chlamydia in men.

It’s the most common reportable disease and yet half of all men infected show no symptoms. Failure to treat this ‘silent disease’ can cause you to become sterile.

While more commonly reported in females, men are still largely affected. For both genders, the largest age group affected were those ages 20-24.

Chlamydia is a bacterial infection that is spread through sexual activities involving the penis, vagina, mouth and anus. The bacteria that causes chlamydia, chlamydia trachomatis can be present in semen or vaginal fluid. This bacteria likes to live in mucous membranes and can cause damage to the reproductive system even without producing any symptoms.

In men chlamydia usually infects the urethra and the anus depending on the sexual activity that caused the infection. While chlamydia is usually associated with genitals, it can also be found in the mucous membranes of the eyelid and throat.

Failure to treat this sexually transmitted infection can result in damage to the reproductive system-even sterility. Men are more fortunate in that about 50% will experience symptoms. Only about 25% of women get any indication that they may have caught an STI.

How is it Spread?

According to the CDC, women under the age of 25 are at the highest risk of contracting chlamydia. While young women may be at the highest risk, anyone who participates in unprotected sex is at risk. Chlamydia is often asymptomatic, so partners may be passing on the STI without ever knowing they were infected. This is why it is so important to get a yearly screening to prevent the spread of this infection.

Research shows that there are some people who are at a higher risk of contracting chlamydia.

One of the reasons that chlamydia is so common is more often than not, chlamydia doesn’t cause any symptoms. This means if you don’t get an annual screening, you may never experience any symptoms, even in case of an infection.

Fortunately for men, they have about a 50% chance of experiencing some symptoms. Although these symptoms are not pleasant, they can prompt a swift diagnosis.

Some common symptoms experienced by men include:

The signs and symptoms of chlamydia in males do not show up immediately. It can take around 5–10 days or more after exposure to chlamydia for symptoms to appear. Different parts of the male urinary system/organs may be affected by chlamydia resulting in:

Urethritis is an infection of the urethra. The urethra is a tube that runs inside the penis and allows semen and urine to exit the body. It is often referred to as non-gonococcal urethritis, which means urethritis that is caused by an infection other than gonorrhoea. The most common symptoms of urethritis include:

The epididymis is the coiled tube filled with sperm attached to the back of each testicle. Infection of the epididymis is called epididymitis and can result in the following symptoms:

Inflammation of the prostate gland is called prostatitis. Chlamydia can lead to chronic prostatitis:

Symptoms of prostatitis include:

Diagnosis is usually simple. Your doctor may ask for a urine sample to check for the bacteria through a urinalysis. Often a swab will be inserted into the tip of the penis to look for chlamydia trachomatis in the urethra. If chlamydia is suspected in the anus, it would also be swabbed. In the case of oral sex, a throat swab may be taken as well.

Since most people don’t develop symptoms, screening may help detect chlamydia. Men who have sex with men should be screened as frequently as every 3–6 months

Treatment for Chlamydia in Men

Chlamydia treatment in men involves a course of oral antibiotics. Treatment may be a single dose of azithromycin or several doses of doxycycline depending on the symptoms.

In the presence of any symptoms or if your sexual partner tests positive, treatment for chlamydia is provided even before your test results come back. If there is a concern for a possible co-infection with gonorrhoea, a single injection of an antibiotic called ceftriaxone (Rocephin) is administered. An alternative first-line treatment includes a 7-day course of doxycycline. However, if you have additional issues, like epididymitis or prostatitis, treatment is usually required for longer.

It is important to inform any current or past partner about your diagnosis so they are also able to be tested. You can still spread chlamydia while taking your antibiotics. It is important to abstain from sex for seven days after your last treatment.

It is possible to become reinfected with chlamydia. Moreover, it is important to take all of your antibiotics and to have any possible partners tested and treated to prevent re-infection.

Prevention of Chlamydia in Men

Prevention is key to helping eradicate chlamydia because it often presents no symptoms. Many people have the infection and unknowingly infect their partners.

There are some steps you can take to better protect yourself:

Long-Term Effects of Chlamydia in Men

The long-term effects of chlamydia in males can vary. However, some of the complications of untreated chlamydial infection include:

Epididymitis, inflammation of the coiled tube at the back of the testicles, can present as fever, pain and swelling in the scrotum.

Infection in the prostate gland is known as prostatitis. Chlamydia can result in prostatitis, pain during or after sex, and painful urination. It can accompany other symptoms such as fever, chills, and lower back ache.

Another complication of a chlamydial infection includes the development of reactive arthritis. This is called Reiter’s syndrome, which affects the eyes, joints and the urethra.

Starting the treatment at the right time can help prevent any serious risks or complications. Speak with a doctor at Your Doctors Online in order to get tested for chlamydia or get a prescription for chlamydia. It is essential to practice safe sex to prevent the spread of chlamydia

FAQs About Chlamydia in Men Answered By Your Doctors Online Team

What does chlamydia do to men?

Men with chlamydia do not have usually have any signs or symptoms. However, men can experience symptoms such as penile discharge, pain or burning while urinating, swelling of the testicles, bleeding or itching around the anus.

Chlamydia in the mouth can present as a sore throat, mouth sores, redness or white spots on the tonsils or at the back of the throat.

How does chlamydia affect males?

Chlamydial infection in males usually affects the urethra resulting in burning while urinating or penile discharge. Untreated infections can lead to complications such as epididymitis or prostatitis as well.

How long can you have chlamydia without knowing?

Can you die from chlamydia?

Chlamydia does not cause death; untreated infection can lead to complications in both men and women. It can result in inflammation of reproductive organs and may contribute to infertility.

What happens if you don’t treat chlamydia?

How long can chlamydia be dormant?

Most people with chlamydia are asymptomatic. Usually, symptoms appear between 1-3 weeks after transmission of infection. However, chlamydia can remain dormant for several years as well.

What happens if chlamydia goes untreated in males?

Untreated infections can lead to epididymitis and inflammation of the tubes that carry sperm from the testicles. This can affect fertility.

Can chlamydia cause erectile dysfunction?