How Your Doctors Online Helped with Bouts of Constipation and Diarrhea 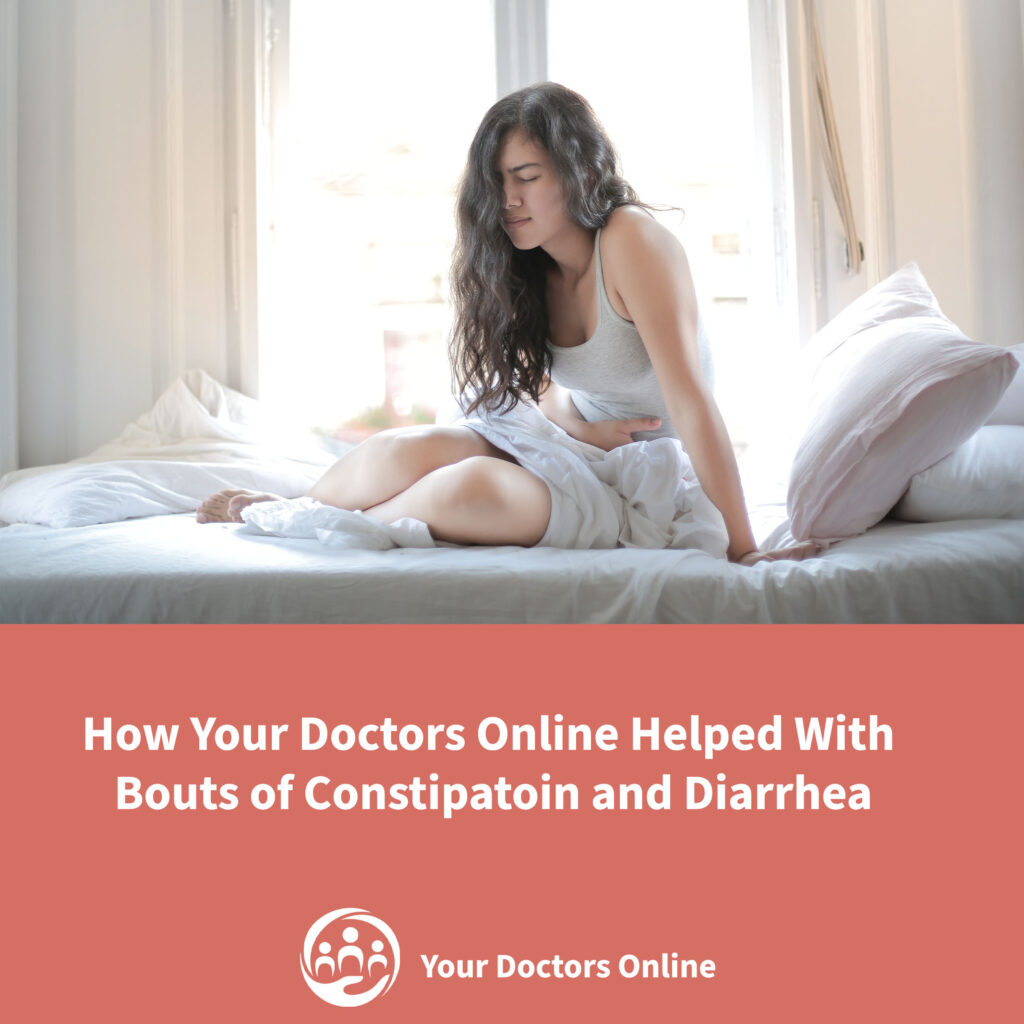 Read how Your Doctors Online helped Melissa with bouts of constipation and diarrhea.

A 20-year-old female with bloating, stomach cramps, constipation, diarrhea, and a rash behind both knees

I have been struggling with many stomach issues for the past year, mainly constipation and diarrhea.

I have tried every over-the-counter digestive aid, medication, probiotic supplement and even natural herbs and concoctions that my mother would endlessly make for me. However, they provided little or no relief to my symptoms; I was still suffering daily.

Initially, I experienced bloating, cramps, constipation and diarrhea, but I recently developed an itchy rash behind both knees. Along with that, I felt exhausted all the time; I could hardly manage to get out of bed most mornings and felt completely drained. I was losing weight without trying, and as symptoms kept worsening, my helplessness peaked. Every day I had bouts of anger, mood swings and episodes of crying. My mom made several appointments for me, but I kept skipping all of them.

My mom signed me up on an online website to help diagnose my condition!

While my mom was visiting one day, she handed me her cell phone and asked me to chat with a doctor. Reluctantly, I stared at the screen and started typing. She had signed me up on an application called ‘Your Doctors Online,’ and I started conversing with Dr. Farrukh. She was very empathetic, making it easier for me to open up. I explained all my symptoms and told her that I was getting worse and needed help.

The doctor asked me a series of questions and requested I share a picture of the rash. After reviewing everything, she informed me that the symptoms I was experiencing were highly suggestive of celiac disease.

She explained that this condition resulted from eating gluten which triggers an immune response in the body, causing inflammation and damage to the small intestine. That is why a person experiences digestive symptoms such as bloating, diarrhea, constipation, gas etc.

She also explained that weight loss resulted from my body’s inability to absorb nutrients due to damage to the intestinal lining. That can also lead to anemia which causes fatigue. Also, the rash was a characteristic symptom and was known as dermatitis herpetiformis.

I felt delighted after the doctor provided me with an in-depth analysis of my symptoms.

Dr. Farrukh instructed me to follow up with my doctor or consult a gastroenterologist for a blood test called tissue transglutaminase IgA (TTG-IgA) test. I may require a biopsy for diagnosis as well. She also instructed me to avoid grains including wheat, barley, spelt, rye and food items that commonly contain those ingredients, including:

Furthermore, the physician told me that I could consume many alternatives, including gluten-free grains, such as quinoa, rice, buckwheat, and millet.

Light at the end of the tunnel:

The doctor clearly explained that there was no cure for celiac disease but that dietary management usually alleviated the symptoms.

She also told me that it would take some weeks to notice an improvement after eliminating gluten from my diet, and diarrhea and constipation will eventually resolve. After chatting with an online doctor on Your Doctors Online, I felt equally relieved and grateful, and I gave my mom a long hug after ending the chat.