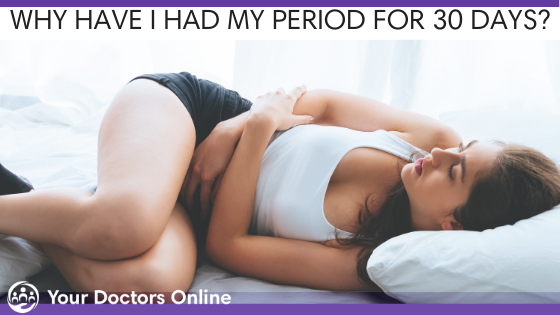 Your monthly period may be your least favorite week of the month-but what does it mean if it lasts 30 days?

Periods can be a source of discomfort and stress for women, especially if it seems never ending. If your period lasts longer than five to seven days, you may be freaking out. If your period lasts 30 days or more, it is time to identify the problem! We asked Dr. Candice Fraser to lend her medical insights on what could cause a month long period.

What is a Normal Menstrual Cycle?

Your menstrual cycle is the process in which the female body prepares for a potential pregnancy each month.  Your hormone levels rise and fall each month to trigger each step in the menstrual cycle. A normal menstrual cycle can last between 21 and 35 days, although the average is about 28 days.

The Menses Phase: Day one of your menstrual cycle is the first day of your period and the beginning of the menses phase. If you have not become pregnant, the lining of your uterus, which had thickened to prepare for pregnancy, will shed from the uterus through the cervix and vagina.

This phase can last as little as two days or as long as seven. There is no ‘normal’ menstrual cycle. However, it is important to track your menstrual cycle to know what is normal for you and your body.

The Follicular phase: This phase typically occurs between day six and 14, but will vary from person to peroson. During this phase the estrogen levels in your body will rise. This increase in estrogen signals the lining of the uterus, called the endometrium, to thicken to prepare for a possible pregnancy. At the same time a hormone secreted from the pituitary gland in the brain called FSH ( Follicle Stimulating Hormone) will signal the follicles containing the eggs in the ovaries to grow.  A fully formed egg, called an ovum, will grow in the second half of this phase. Typically between day 10 and 14.

The Luteal phase: This phase spans the final 14 days of the menstrual cycle.. Once the egg is released, it travels through the fallopian tubes towards the uterus. The remnant of the follicle that released the egg is called a corpus luteum. The corpus luteum secretes the hormoneprogesterone, which makes the lining of the uterus thicker to prepare for implantation of a fertilized egg. If the egg is fertilized, it will implant in the uterus and result in a pregnancy. If it is not fertilized, the estrogen and progesterone levels will fall. This will signal the uterus lining to begin shedding and menses will begin again.

By tracking your cycle, you can learn what is normal for your body and can anticipate your menstrual cycle. A sudden change may indicate a health issue and should not be ignored. If your period lasts more than seven days, you are experiencing heavy menstrual bleeding.

Are You Worried About Your Period? Connect With Our Doctors Online 24/7
Talk to a Doctor

What is Heavy Menstrual Bleeding?

You can determine if your periods are unusually heavy if you are soaking a pad or tampon in less than two hours or passing clots larger than the size of a quarter. Your bleeding is considered prolonged if it lasts longer than seven days. It is also considered heavy if you need to change your pad or tampon overnight or need to wear more than one pad at a time to control the flow.

Prolonged,  heavy bleeding can impact both your quality of life and your health.  Women may find it difficult to live their daily lives normally as they may be constantly visiting the washroom or worried about leakage.Prolonged, heavy bleeding may lead to anemia, which is a blood disorder characterized by not having enough healthy red blood cells. Anemia can be mild without any symptoms or  can cause you to feel dizzy or weak, cause breathing problems, heart issues and lead to further health issues.

Related: Your Doctors Online Helped Me Regulate My Periods

In general, there are three possible causes for heavy or prolonged bleeding during your period.

Don’t Lose Sleep Over Your Menstrual Cycle. Talk To Experienced Online Doctors
Talk to a Doctor

How is Heavy Menstrual Bleeding Evaluated?

Your doctor will likely also ask you the following:

What Tests are Needed to Treat Heavy or Prolonged Periods?

If you are suffering from heavy or prolonged periods your doctor will likely need to do quite a few tests to determine the cause of your symptoms.

Most healthcare providers will start will a full physical exam, including a pelvic exam. In addition your doctor will likely want to perform the following tests:

Some additional tests may be necessary based on your age and symptoms.

How is Heavy Menstrual Bleeding Treated?

Doctors will often try to resolve the symptoms  first with medications before trying more invasive procedures.

Birth Control: Birth control is often used to control heavy bleeding associated with polycystic ovarian syndrome, endometriosis, fibroids and problems with ovulation. Depending on the type of birth control prescribed, it may regulate your period, decrease flow or even stop it altogether.

Gonadotropin-releasing hormone (GnRH) agonists: These are used for short periods (less than 6 months) to stop your period and reduce the size of your fibroids. Unfortunately their effect on fibroids is temporary.

Hormone therapy: Hormone therapy is often used for heavy bleeding during perimenopause (the period before you go into menopause.) Tranexamic acid: This prescription tablet is taken at the beginning of the menstrual period to help with heavy menstrual bleeding.

Nonsteroidal antiinflammatory drugs (ibuprofen): can help with both cramps and heavy menstrual flow.

Those with bleeding disorders may be prescribed medication to help  blood clot more effectively.

Which procedures can be used to treat heavy menstrual bleeding?

If your doctor determines that medication alone is not enough to stop your bleeding a surgical procedure may be needed:

When Should I Talk to a Doctor About Long Periods?

Long and prolonged periods may be common, but they are treatable. In many cases, they may be symptoms of a reproductive health issue that needs to be addressed.

Discuss health questions with a doctor 24 hours a day. Simply download our free app and begin chatting with a online doctors within minutes. Skip the waiting room (and the worry!) and get connected right away.

Suffering From Period Problems? Chat With a Doctor and Get Prescription
Talk to a Doctor