Are Diabetes Symptoms Different in Women? 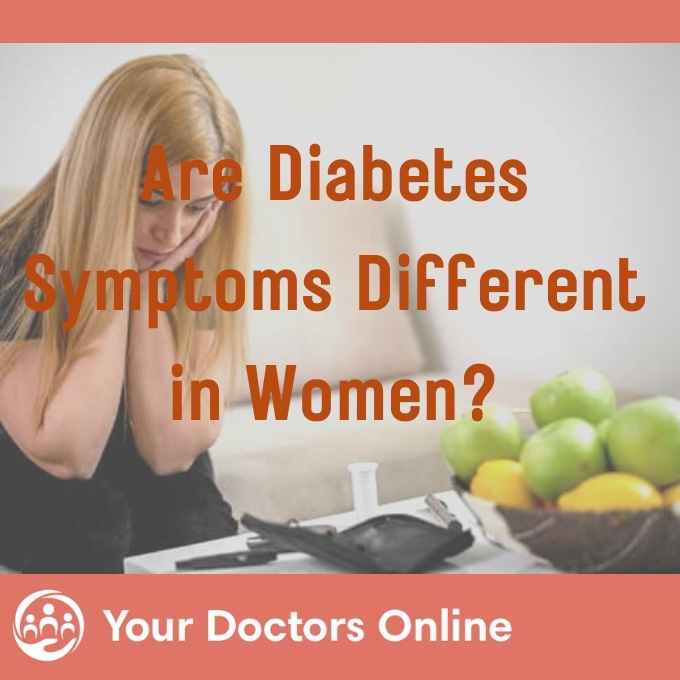 There are a lot of concerns from women about diabetes. Are the signs and symptoms of diabetes different in women? What major health issues affect women with diabetes more than men? These questions answered and diabetes signs and symptoms explore in the following.

How Does Diabetes Happen?

Diabetes is an energy releasing affliction that happens when your glucose (more commonly known as blood sugar) is excessive. An excess blood sugar level is called hyperglycemia. Your body uses glucose for energy and the pancreas manufactures a hormone called insulin. Insulin is the one responsible in transforming the glucose from your food intake into energy. If not enough insulin, or no insulin at all, is manufactured, glucose won’t be able to reach your cells to be utilized as energy. The resulting condition is diabetes.

The Types of Diabetes

There are two principal types of diabetes, and women are susceptible to both.

It is a condition that usually occurs before type 2 diabetes, when your glucose is greater than the usual but not that high enough to be diagnosed as diabetes. Most of the time pre-diabetes doesn’t have signs and symptoms. That’s why there are no warning signs. It can be confirmed by getting a blood test. In five years’ time, this condition could result to type 2 diabetes if there are no changes in your diet and lifestyle.

Plenty of type 1 and type 2 diabetes signs and symptoms found in women are pretty much the same as those found in men, but there are some signs and complications that are unique to women.

Diabetes Signs and Symptoms that are Similar for Both Men and Women:

Some problems that could arise from both type 1 and type 2 diabetes are similar like skin, eye, circulation, hyperglycemia, hypoglycemia (low blood sugar), ketoacidosis, and amputation.

Men, women and children have chances of getting diabetes, but this condition can pose some issues that are unique to women. According to a 2007 study between the years 1971 and 2000, mortality rates for men with diabetes decreased, but mortality rates for women did not.

Women in general live longer than men because of their lower risk of heart disease as compared to men, but when they do develop diabetes their risk for heart ailments soars and as a result hear attacks are more fatal for women than for men. The following shows other instances of how diabetes affects women separately:

Kidney disease is one other problem that results from both type 1 and type 2 diabetes and affects women more dynamically, forcibly, and strenuously than men. Depression is also doubly more prevalent in women who have diabetes than in diabetic men.

Here are some of the reasons why both type 1 and type 2 diabetes affect women more fiercely than men:

It shouldn’t affect anyone’s pregnancy as long as it’s managed appropriately. For those who are planning to get pregnant, consult your doctor so your blood sugar level is properly managed before you become pregnant. Get a grasp of how to keep track and manage your diabetes and blood sugar levels while pregnant.

If your glucose level is high during pregnancy, both the baby and mother have risks and could result to:

What is Gestational Diabetes?

It’s the term used when diabetes happens in women while being pregnant. The diagnosis usually occurs between the 24th and 28th weeks of pregnancy. Just like in type 1 and type 2 diabetes, glucose levels are also excessive. This happens because pregnant women need more glucose to nourish the developing baby.

As a result, your body will need more insulin and in some cases, the bodies of other women don’t manufacture sufficient insulin to satisfy the need. As a result, glucose levels escalate and lead to gestational diabetes.

Here are some of the risk factors for gestational diabetes:

What to Do if You Believe You Have Pre-Diabetes, Diabetes, or Gestational Diabetes

Once you are diagnosed with diabetes that can be determined through the checking of your blood sugar levels, you will be guided on a plan to keep it normal. If your diabetes is a mild one, the doctor will most likely suggest a diet plan accompanied by exercising and weight loss routines. Medications may also be prescribed to aid in the reduction of your blood glucose levels. For some women, insulin may be needed.

Signs and Symptoms of Gestational Diabetes

It usually has no signs and symptoms, but you may experience some of these:

Do you have diabetes, or concerned about pre-diabetes? Our team of expert North American doctors and specialists are here to help. You can talk to a doctor for free today and get the answers you need and deserve.