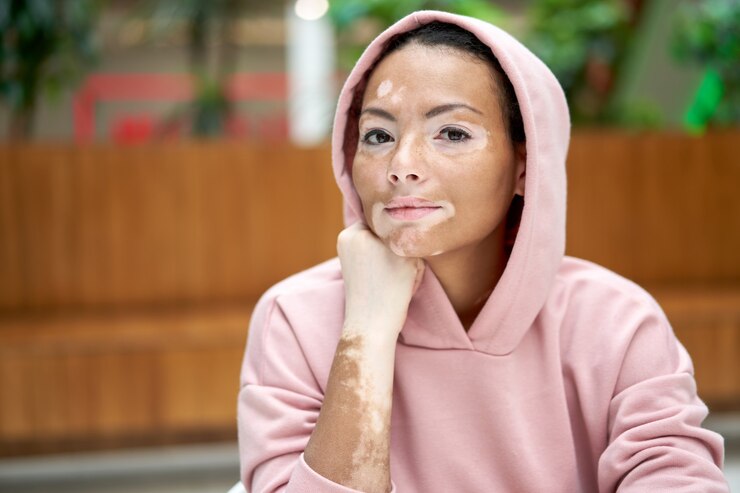 Vitiligo is a chronic disease of depigmented white macules and patches that result from the destruction of melanocytes in the affected skin.

In this article, you will get comprehensive information about vitiligo, its signs and symptoms, the triggering factors, and the treatment.

Let’s read this article to learn all about vitiligo.

Vitiligo is an autoimmune disorder that causes patches of skin to lose color or pigment. It happens when melanocytes (skin cells that make pigment) are attacked and destroyed, causing the skin to turn a milky-white color.

Vitiligo is common and affects approximately 1% of the world’s population. It has no prominent sex predilection. It may occur shortly after birth until late adulthood, although over half of the individuals are affected before age 20. It can appear anywhere on the skin.

Are you getting White Patches on your skin? Talk to our Doctor for Diagnosis
Talk to a Doctor

Anyone can get vitiligo, and it can develop at any age. However, in many people with vitiligo, the white patches appear before age 20 and can start in early childhood. It’s more common in people who have a family history of the autoimmune disorder or who have certain diseases, such as:

Segmental vitiligo typically affects just one side of your body. It can also be referred to as unilateral vitiligo.

Generalized vitiligo is also known as non-segmental or bilateral vitiligo, the most common type of this condition. In this type, depigmented patches appear symmetrically on both sides of the body. For example, it may seem like matching spots on both arms or legs.

With generalized vitiligo, the color loss is rapid and widespread, covering large body sections. In most cases, this type of vitiligo can progress and then stop, switching through an on-again, off-again cycle.

Some subtypes of vitiligo describe how much of the skin is affected.

This is a rare type of vitiligo that develops in a single area and doesn’t spread throughout the body in a predictable pattern after a short period of time.

It usually affects the mucous membranes of the mouth or genitals.

Consult to our Doctors to Know What can Trigger Vitiligo?
Talk to a Doctor

How Does Vitiligo Start?

It usually starts with small white macules or patches that may gradually spread over the body. Vitiligo typically begins on the hands, feet, and face. Still, it can develop on any body part, including the mucous membranes, the eyes, and the inner ears.

Sometimes, larger patches may continue to spread, but they typically stay in the same place for many years. The place of smaller macules shifts and changes over time as some areas of skin lose and regain their pigment.

The amount of affected skin varies from person to person. Many people experience a few depigmented areas, while others have a widespread loss of skin color.

A common symptom of vitiligo is the loss of skin coloring in patchy areas around the body. This depigmentation can appear in a few different ways:

A lack of pigmentation in the skin causes vitiligo. The reason is unknown. Studies suggest vitiligo could be the result of the following:

A visual examination by a dermatologist usually leads to an accurate diagnosis of vitiligo. Your dermatologist may use a Wood’s lamp to look at your skin. This lamp uses an ultraviolet (UV) light that shines onto the skin to help your doctor differentiate vitiligo from other skin conditions. In addition, your dermatologist may ask you about your medical and family medical history.

Your doctor may need more information about the skin cells to confirm the diagnosis. A skin biopsy can definitively differentiate between missing and malfunctioning melanocytes. Vitiligo can be diagnosed if these pigment-producing cells are missing. A rare form of skin cancer known as Hypopigmented mycosis fungoides may cause white patches due to malfunctioning melanocytes. Skin biopsy can rule out this possibility and help determine the exact disease.

The doctor may prescribe a medication that stops the immune system from destroying the melanocytes and improving your skin’s appearance. In most cases, the goals of the treatment are to:

Topical medications can add color to your skin or calm inflammation. The most common topical cure for vitiligo is a potent topical corticosteroid. Still, even this treatment can take five to six months to restore some color, which only happens for about half of the people who use it. Corticosteroids carry many side effects, like making the skin thinner and more delicate. For this reason, it’s only used for small areas, and not all varieties of corticosteroids are for the face. This medication option is most effective in people with darker skin tones and is least effective on the hands and feet.

Opzelura (ruxolitinib) is a topical medication approved by the Food and Drug Administration (FDA) to treat eczema and vitiligo. This medication is a Janus kinase (JAK) inhibitor for preventing inflammation.

Tacrolimus ointment or pimecrolimus creams are some other options for children and adults. One advantage of these medications is that individuals can use them longer than corticosteroids. These work best to treat the skin.

Another medication that can restore lost pigment is calcipotriene. While not effective when used alone, it can be effective with a corticosteroid. Applying these medications as directed can increase the re-pigmentation and shorten the time it takes to get results.

For many people with vitiligo, dermatologists may recommend phototherapy, also known as light therapy. Phototherapy can be considered an initial or successive treatment if topical medications don’t work. Photo Therapies work by using light to restore lost color to your skin. It usually requires a significant time commitment.

It is the light treatment of choice for generalized, non-segmental vitiligo. Narrowband UVB is considered safe enough to use on children or pregnant women. This treatment can be performed in clinics or at home with small, medium, or large devices. It may work even better when combined with topical medication.

In cases where medication and phototherapies don’t work, surgical procedures may be considered. Surgery can only be generally considered in adults whose white patches haven’t changed for at least seven months. Different surgical techniques are used to treat vitiligo, most of which involve transferring skin or skin cells from an area of skin that is still pigmented to a depigmented place. Two surgical procedures are used to treat vitiligo: tissue grafting and cellular grafting. In either case, the top layer of the non-pigmented skin is usually removed to enable the transplant.

How to Prevent Vitiligo?

There are different ways to help you prevent vitiligo.

It may cause the following:

Difference Between Vitiligo and Tinea Versicolor

When Should I See My Doctor?

The changes to the skin may affect your mental health and well-being. You can consult professional doctors at your doctors online application in order to get the treatment that is required.

FAQs About Vitiligo Answered by Your Doctors Online Team

It has no cure, but the treatment might stop or slow down the dis-coloring process. The dermatologist may prescribe some medications to repair the skin color.

No, vitiligo is not painful, but you can get painful sunburns on lighter patches of the skin affected by vitiligo.

It is not strictly associated with family genetics. Its inheritance pattern is complex. About one-fourth of people with this condition have at least one close relative who is also affected.

How to make your skin lighter?

Depigmentation may be recommended for adults with vitiligo on more than 60% of their bodies, although it may not be widely available. As part of the depigmentation process, a lotion is painted onto the normal skin to bleach away the remaining pigment.

Can white people get vitiligo?

Yes, white people can get vitiligo as it affects all skin types, but it can be more noticeable in people with brown or Black skin color.

It usually spreads and evolves into other forms quickly. Sunburn or exposure to certain chemicals triggers vitiligo to spread.

This condition is not dangerous or life-threatening but may spread if left untreated.